The outdoor cats have been plagued by a pair of mockingbirds and we’ve had our fair share of annoyance from them as well. Early on, when the male was trying to attract a female, he would sing 50 million different calls. He sang in verses, repeatedly in a row, before changing tune. His favorite spot was on the peak of the roof next to the chimney vent, so his calls were amplified all the way into the living room – leaving a person with no respite!

Here is one of them (maybe the male?) on patrol.

The cats would walk through the grass near to a tree they sat in and that was enough to antagonize the birds. They would swoop and dive at the cats, which would cower and give a peeved look of “What the fluff?!”

I never could figure out where the nest was until recently. I needed to mow the duff down in the ewe paddock up around the house and when I neared our young ornamental pear tree, I noticed a nest. Here is what I was able to see, since the nest was located on a very low branch. 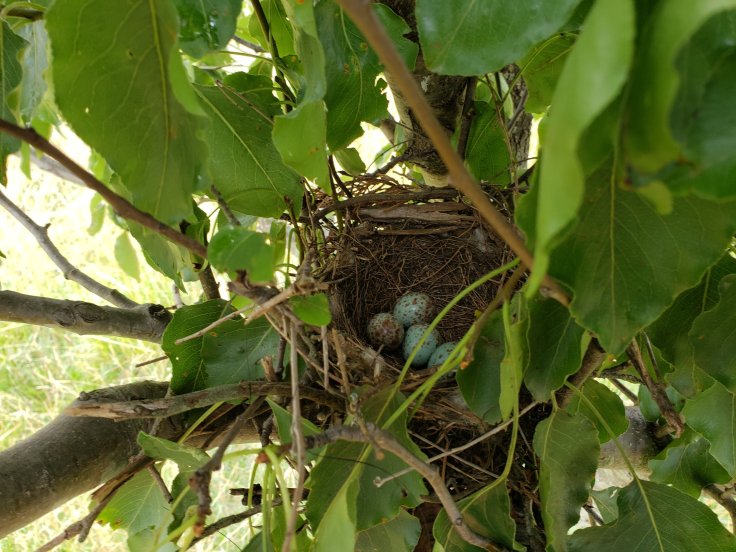 It’s lucky the mockingbirds chose this spot as it is inside the electric mesh where cats don’t roam!

Anyways, the parent on the nest that day had an absolute conniption fit when I mowed under the tree. I still haven’t heard babies cheeping and I hope I didn’t scare the parents away permanently with the mowing! I did see one of them collecting a dead grasshopper after the mowing… Hopefully the eggs are still viable!